What is the Outlook? 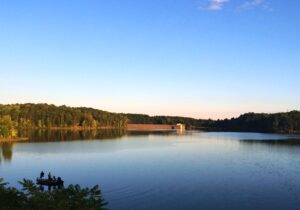 ICPRB’s Section for Cooperative Water Supply Operations on the Potomac (CO-OP) was established to serve as a cooperative technical center on water resources in the Potomac basin. CO-OP staff publish the Water Supply Outlook on a monthly basis between April and October of each year. It provides an update on the possibility of water supply releases from the area’s reservoirs based on long-term precipitation data, flows, and other information for the Potomac basin.

There is a near-average probability of releases from the Washington metropolitan area’s backup water supply reservoirs for the remainder of the 2022 fall season. The use of Jennings Randolph and Little Seneca reservoirs is generally triggered by low flows brought about by a combination of low summer precipitation and groundwater levels. Streamflow is currently above normal, and groundwater levels range from much below average to average for the Basin monitoring wells. However, at the end of September, the Potomac River flow at the Point of Rocks streamflow gage dropped below 2,000 cubic feet per second (CFS), which generally would have triggered daily drought monitoring by ICPRB. Fortunately for drought conditions, the remnants of Hurricane Ian ended the summer wetter than average for many areas, even though over the summer season, most places were drier than average for the Mid-Atlantic region. The remnants of another tropical system can still pass by or through the Basin through early fall, which could bring additional precipitation. However, the Mid-Atlantic River Forecast Center reports that there are currently no strong indicators of a wet fall. Currently, there is sufficient flow in the Potomac River to meet the Washington metropolitan area’s water demands without a release from upstream reservoirs. If low-flow conditions develop, the metro area is well-protected from a water supply shortage owing to carefully designed drought-contingency plans.

There is a 2 to 6 percent conditional probability that natural Potomac flow will drop below 600 to 700 million gallons per day (MGD) at Little Falls through December 31 of this year; at these flow levels, water supply releases from Jennings Randolph and Little Seneca reservoirs may occur. Releases occur when the predicted flow is less than demand plus a required environmental flow-by. Drinking water demand ranges from 400 to 700 MGD during summer, and the minimum flow-by at Little Falls is 100 MGD. Note that natural flow is defined as observed flow at the Little Falls gage plus total Washington metropolitan Potomac withdrawals, with an adjustment to remove the effect of North Branch reservoir releases on stream flow.

Please contact us if you would like to be notified when new Water Supply Outlooks are posted.