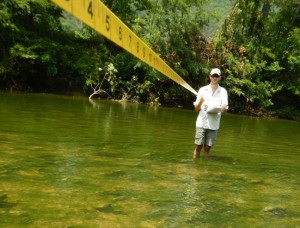 ICPRB staff analyzed the data for relationships between nutrient enrichment and the algal blooms. Staff also explored the effects of filamentous algae blooms on the benthic macroinvertebrate community structure in the Cacapon River. Benthic samples were collected at different times in summer at locations upstream, downstream, and inside the Rim Rock bloom site. Continuous measurements of dissolved oxygen, temperature and light were made at the bloom site and nearby non-bloom sites between June and October.