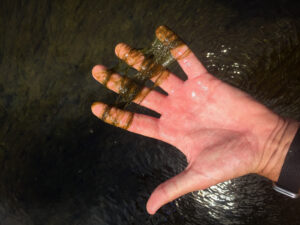 Algae and plants attached to the stream bottom are important food sources and habitat for fish and macroinvertebrates, but dense growths or “blooms” can cause dangerous daily swings in dissolved oxygen and pH. Some algal taxa can also release harmful toxins into the water.

Large summer blooms of filamentous algae are becoming more common in some Potomac streams and rivers.

The U. S. Environmental Protection Agency (Region 3, Mid-Atlantic) initiated a multi-year study in 2021 to find out how recreational users of streams and rivers in the Chesapeake watershed view algae in those waters.

Question: When does the intensity of an algal bloom annoy, discourage, or prohibit recreational use of the water?

A professional survey of recreational users including fishermen, boaters, swimmers, and hikers will identify thresholds above which recreational use of the water is impaired. These thresholds can be useful in developing numeric criteria for reducing nutrient pollution, the underlying cause of nuisance algal blooms. ICPRB is participating in the workgroup guiding the study.

Contact us if you are a recreational user of streams and rivers in the Chesapeake watershed and think you would be interested in participating in this study.

ICPRB scientists investigated a variety of field methods for measuring filamentous green algae (FGA) in streams and rivers in the Shenandoah River watershed. One method was originally developed by West Virginia Department of Environmental Protection (WVDEP) using bank-to-bank transects and longitudinal sections. The potential for citizen monitors to apply this method was explored. The study also tested the potential of image processing software as a tool for independently verifying visual estimates. ICPRB completed a final report describing the methods and submitted it to the U.S. EPA Region 3 in March 2015. ICPRB also began identifying information available in the literature about FGA ecology and management. 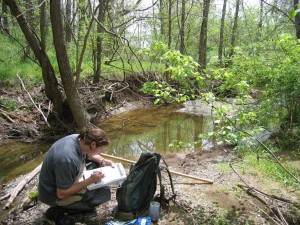 Do you have a favorite stream that you paddle, fish, or walk along? Have you found areas where stringy green algae seem to always grow? How about dense stands of underwater grasses, or areas where the water always seems green with algae? Would you share your observations with us?

ICPRB wants to learn more about the prevalence and ecological impact of algae and plants in Potomac freshwater systems. Logistically, this task is daunting without the help of volunteers. We are asking volunteers throughout the Potomac basin to report bloom areas that they regularly visit. Ideally ICPRB biologists will be able to target more research efforts on these algal hot spots.

Alkalinity and Hardness play a critical role in the bio-availability of nutrients, the primary cause of problematic algae blooms. James Summers (WVDEP 2008) reported in the “Assessment of Filamentous Algae in the Greenbrier River and other West Virginia Streams” that algal production falls along a gradient of water quality conditions. In some cases direct contact with nutrient rich wastewater or agricultural runoff caused large scale nuisance algae blooms. In other cases, such as in reference streams, when little or no excessive nutrients entered a system, very little algae or periphyton are observed.

One particular case, the Cacapon River, manifested highly productive algae communities despite the absence of any detectable nutrient source. The chemical “Goldilocks” zone that exists in the Cacapon (Alkalinity >40, Hardness <100) and elsewhere appears to chemically influence the availability of nutrients to primary producers.

ICPRB queried the EPA water quality database, STORET, and created a “risk” metric of areas that are more likely to yield elevated primary production based on non-nutrient factors. We found that the “Goldilocks” zone is not equally distributed temporally or spatially across the basin and seems elevated production risk is greatest in regions influenced by groundwater or anthropogenic pollution. ICPRB continues to investigate the causes of excessive primary production across the Chesapeake Bay watershed and remains active in responding to algae bloom events as they occur.