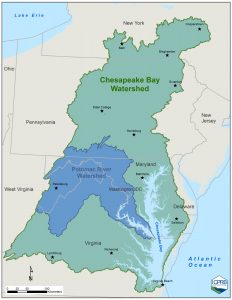 The land of the Potomac Basin varies a great deal from its sources to its mouth, and so do its people. It is difficult to fully describe the Potomac and its people because of their variety and because they are both constantly changing. With that in mind, here is a current snapshot of the basin’s land, its people, and its water. 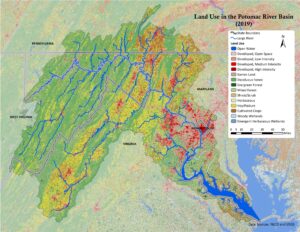 The Potomac’s major tributaries include: the Anacostia River, Antietam Creek, the Cacapon River, Catoctin Creek, Conococheague Creek, the Monocacy River, the North Branch, the South Branch, the Occoquan River, the Savage River, the Seneca Creek, and the Shenandoah River. Visit our maps section to see these watersheds in detail.

The national average population density is 94 people per square mile. In the late 1500s, the average population density was 2.2 people per square mile. People living in urban areas account for the lion’s share of the basin’s residents at almost 81 percent of the population. Those living in rural areas make up 18.6 percent of the population, while those living on farms account for 0.7 percent. The Washington metropolitan area has approximately 5.1 million residents, or 84 percent, of the basin’s population (2010 census data).

Major cities in the Potomac basin include: Bethesda, Cumberland, Hagerstown, Frederick, Rockville, Waldorf, and St. Mary’s City in Maryland, Chambersburg and Gettysburg in Pennsylvania, Alexandria, Arlington, Harrisonburg, and Front Royal in Virginia, Harper’s Ferry, Charles Town, and Martinsburg in West Virginia, and the largest city in the basin, Washington, D.C.

The basin’s major industries include: agriculture and forestry throughout the basin, coal mining and pulp and paper production along the North Branch Potomac River; chemical production and agriculture in the Shenandoah Valley; high-tech, service, and light industry, as well as military and government installations in the Washington metropolitan area; and fishing in the lower Potomac estuary. 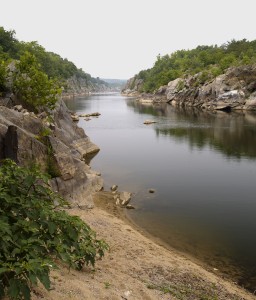 History of the Fairfax Stone as a boundary marker of the Potomac basin.

Learn more about the Potomac and ICPRB’s history