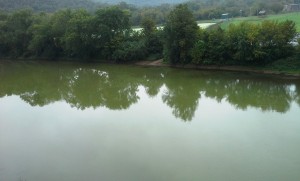 Recent events have increased the focus on infrastructure security throughout the United States, including that for water supplies. The Potomac River basin is no exception. In the metro Washington area, about 75% of drinking water comes from the Potomac River. Across the basin there are 77 public water supply systems with surface water intakes. When spills occur, water suppliers, local emergency responders, state emergency management agencies, and federal agencies mobilize quickly to protect public health and minimize environmental impacts. During the spill response, the Interstate Commission on the Potomac River Basin’s (ICPRB) Emergency River Spill Model (ERSM) is an important tool in protecting public water supplies along the Potomac River from an upstream contamination threat.

The Model estimates the movement of spills along the Potomac, from Cumberland in western Maryland to Little Falls dam upstream of Washington, D.C., and several major tributaries. It provides timely information to water suppliers and emergency response agencies along the river so they can appropriately respond to the situation and protect water supplies and other uses of the river. The ERSM provides estimates of travel times from the site of the spill to downstream points of interest or concern, including estimates for the leading edge of the spill, time of maximum concentration, the trailing edge, and estimates of the maximum concentration.

Click here for a short video on the Emergency River Spill Model.

The Emergency River Spill Model was developed based on dye studies conducted in the river by the U.S. Geological Survey. In those studies, a fluorescent dye was put into the river and its downstream travel monitored. The model is best suited for substances that mix in the water column, including bacteria in sewage spills. The model is less suited for floating products such as oil but still can provide useful information about those events and ICPRB is developing additional tools to model these types of events.

The ERSM’s travel time information and characteristics of the spilled material gives emergency responders, water suppliers, and other river users advance notification of when a spill might arrive at downstream points of interest. This information is integrated into many government and facility emergency response plans and is used to make decisions about when and where to collect water samples, warnings to the public, modification to water treatment methods, or even temporary closure of a drinking water intake.

An important component of ICPRB’s response to material spills is the dissemination of information to the media and other stakeholders in the basin. As needed, ICPRB shares information with the public, including advisories from the suppliers. These advisories could involve a variety of actions, including water conservation or a recommendation to boil the water before use.

If a spill has occurred in the Potomac watershed, ICPRB will track its progress on our website and social media. Sign up for our newsletter, like us on Facebook, and follow us on Twitter to stay informed. Other organizations, such as the Potomac Conservancy and the Potomac Riverkeeper Network, may also track pollution events.