ICPRB have been actively participating in the development of Phase 6 of the Chesapeake Bay Watershed Model (P6) as a member of the CBP Modeling work Team for the past six years. ICPRB staff have also used their understanding of the model to help Maryland Department of the Environment (MDE) evaluate P6 for use in the development of local sediment TMDLs.

Based on the evaluation by ICPRB, additional factors that may affect the applicability of P6 output for local TMDL development include P6’s representation of the fate and transport of sediment in developed areas, namely: 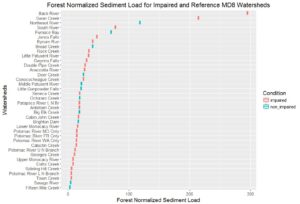 At MDE’s request, ICPRB evaluated the feasibility of using the existing TMDL methodology (based on P5) with the P6 simulations in its current state to develop local sediment TMDLs in Maryland. The findings of this effort were that there was no clear separation in forest normalized loads between the impaired and non-impaired watersheds, besides, it is not plausible that erosion rates throughout the Bay watershed equal the average Bay watershed erosion rate.

These findings prompted ICPRB to propose an alternative methodology, the “strawman approach”, should MDE prefer using outputs from the P6 model. In this approach, adjusting P6 streambank erosion and floodplain deposition to ensure that instream sediment loads are redistributed based on assessed sediment impairment would ensure that stream segments that are assessed to generate a greater proportion of sediment load relative to other areas are assigned that proportion of sediment load within the watershed.

ICPRB will continue to work with the CBP modeling team on the development of Phase 7 of the Bay watershed model (P7), which is set to be completed in 2025.