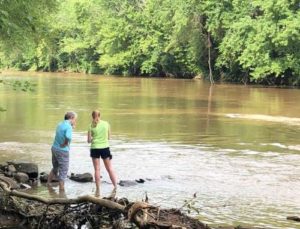 The North Branch Potomac River and its tributaries are recovering from significant environmental degradation experienced in the 20th century. Riverbank communities flooded frequently and river waters were adversely impacted by low pH, industrial effluents, municipal wastewater discharges, and sediments.  A dam across the river was completed in 1982 to create Jennings Randolph Lake. The lake, operated by the U.S. Army Corps of Engineers, has four mandates: control flooding, dilute downstream pollution, supply drinking to Washington DC during droughts, and provide for recreation.

A multi-year study began in 2018 to determine if an update of the Army Corps’ 1997 Water Control Plan for Jennings Randolph Lake is needed. Watershed and river conditions have improved significantly since the turn of the century, an outcome of regulatory enforcement, mine runoff mitigation, wastewater treatment,  infrastructure improvements, forest regrowth and the abatement of acid rain. The Commission, in partnership with the Corps, has produced a draft Scoping Study report that reviews the dam’s long-running operational objectives and procedures, and assesses the current importance of these procedures in achieving the four mandates. It also reviews various modeling approaches that incorporate modern science and technology for better future management.

As background for the Scoping Study, ICPRB reviewed and analyzed data collected by multiple agencies and drafted two reports which evaluate the influence of current dam operations on conditions in the river mainstem: