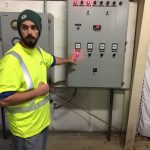 During a drought, ICRPB coordinates water supply operations for the three major water utilities in Washington, D.C., and the adjacent suburbs in Maryland and Virginia. In preparation for such an event, ICPRB and the utilities practice communications and simulate operations of the system as they would occur during an actual drought.