Several agencies, including ICPRB, signed a cooperative agreement in 1995 to reestablish migratory and anadromous fish access to their historic spawning habitat upstream of Little Falls Dam on the Potomac River. The resulting “fishway” was completed in January 2000.

Sometimes a population needs a little help coming back. American shad stocks were depressed in the Potomac River despite significant improvements in water quality and a river harvest moratorium in effect since 1982. ICPRB spearheaded a collaborative effort to stock American shad that began in 1995. The effort was designed to imprint shad to the historic Potomac spawning and nursery waters and help stocks reestablish while the fishway was being built. Stocking continued after the fishway opened, significantly jump-starting the successful restoration of this important migratory species in the Potomac River. 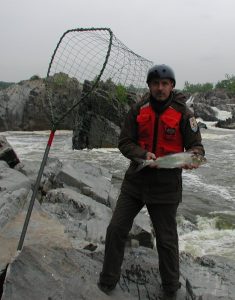 Mike Odom, USFWS, with one of the first American shad captured at Great Falls after the fishway was opened in 2000. Mike is standing on “Shad Rock,” so-named in the late 1800s.

Each spring as adult shad returned from the ocean to the Potomac River, ICPRB collected and fertilized shad roe to be raised in fish hatcheries and classrooms. Fingerlings were then released in their historic spawning and nursery areas in the Potomac and year class survival was monitored in the juvenile seine surveys performed by Maryland Department of Natural Resources each summer. Through this stocking effort, shad populations recovered very quickly in the Potomac River. They recovered so well that since 2002, Potomac shad has been a major egg source for Maryland’s streams being restored with shad, the Rappahannock River in Virginia, the Susquehanna River in Maryland and Pennsylvania, and some of Delaware’s rivers. The Potomac portion of the restoration project was wrapped up in 2014.