This Potomac River Mainstem Biological Monitoring project documents the status of three key biological communities in critical sections of the Potomac River mainstem. It helps to determine if the mainstem is meeting water quality goals and Clean Water Act objectives, and it increases our ability to assess the potential impacts of water withdrawals and flow modifications in the Great Falls and Little Falls sections of the river during droughts. The project augments state-wide monitoring programs in Maryland and Virginia.

Monitoring, which began in 2012, took place at three mainstem sites: 1) near Knoxville, Maryland; 2) Great Falls, near Difficult Run; and 3) Little Falls, downstream of the Brookmont Dam. Benthic macroinvertebrates, submerged aquatic vegetation (SAV), and freshwater mussels were surveyed once each summer between June and September. These reaches were selected because they are difficult to sample and represent gaps in spatial coverage of the mainstem in the otherwise comprehensive Maryland Department of Natural Resources (MD-DNR) Core Trend Monitoring Program. Data from the Knoxville reach will improve our understanding of the mixing zones below the confluence of the Shenandoah and Potomac rivers and the relative importance of each river at the Potomac water supply intakes downstream. The Carderock and Little Falls reaches are important in identifying stresses on the river’s biological communities that could relate to upstream consumptive losses and water supply withdrawals during severe droughts. The Little Falls reach is in the only stretch of the Potomac River with a minimum flow-by requirement.

Excerpts from the Executive Summary: 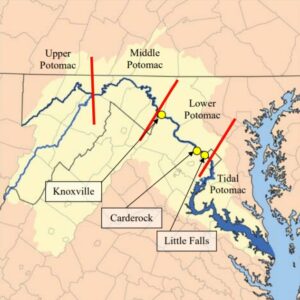 Surveys of freshwater mussel and benthic macroinvertebrate populations were conducted during late-summer low-flow periods of 2012, 2013, and 2014. The three years of the study had moderate flows overall and did not experience extreme drought or floods, so managers and researchers should view the results as a characterization of biological communities unaffected by flow extremes. In addition to recording mainstem Potomac species distributions, biological collections underwent post-collection analyses that provided an informed baseline for the collection effort required to achieve sufficiently accurate data in the future.

Collections yielded 875 individuals across the three mainstem reaches during the 2012-2014 period. Four species were identified: Eastern Elliptio (Elliptio complanata), Lamp mussels (Lampsilis sp.*), Brook Floater (Alasmidonta varicosa), and the Creeper (Strophitus undulates). Average detection rates ranged from a low of 3.06 mussels/person-hour at Knoxville to a high of 44.70 mussels/person-hour at Carderock, with detections at Little Falls falling in between at 24.50 mussels/person-hour. Mussel densities were 0.05 mussel/m² at Knoxville, 0.44 mussels/m2 at Little Falls, and 0.49 mussels/m² at Carderock.

As freshwater mussels are one of the most imperiled groups in the United States, the significant effort required to document their presence in the mainstem Potomac River was worth the logistical hardships these methods entail.

Community composition was similar across all three reaches. Carderock and Little Falls locations had similar taxa richness values (72 and 66 genera, respectively) while the upstream Knoxville location had a somewhat higher taxa richness (87 genera). A genus level inventory of mainstem benthic macroinvertebrates was recorded for each location. A stepwise rarefaction analysis was applied post collection to the raw datasets to calculate catch per unit effort (CPUE) for each of the large river reaches. Our results show that 400-count subsampling is applicable to richness level metrics in large river locations, while metrics such as percent composition, diversity metrics, and tolerance metrics require less effort (100-count subsampling). A non-metric multidimensional scaling (NMDS) analysis was applied to benthic samples to confirm that during the three sampling years (2012-2014) there was no significant differences observed due to inter-annual variation.