On August 31, 1918, Congress passed legislation to bring Anacostia Park into existence. Since that day one hundred years ago, Anacostia Park has become the nation’s neighborhood park. The 1200-acre park is located on the east side of Anacostia River in Southeast D.C. and is one of the biggest parks in the city. The National Park Service works hard to make the park an urban oasis with amenities for all.

The Anacostia Riverwalk Trail is a favorite among Washingtonian runners. Its 12-miles of smooth, wide trails with a beautiful river view is great for walkers, runners, and bike-riders alike.

Sports fields, a swimming pool, picnic tables, and acres of green grass are all popular amenities at Anacostia Park.

For a bit of vintage fun, strap on your rollers skates and check out their rolling rink. Don’t have a cool set of wheels? They offer free rentals throughout the season, Memorial Day through Labor Day.

Trout fishing is a good option in the upper basin, where rivers have cleared somewhat and water temperatures are great for trout. The trout management areas are holding nice fish, although wading in some areas should be avoided. On the upper river, boating and fishing should be avoided, although there has been some activity in the Brunswick area.

Anglers in the area of Fletchers Boat House in Washington are reporting some catches of crappie and catfish.

In the tidal Potomac, Anglers are dropping lures and live bait at bridge pilings in Washington for a mix of largemouth bass and catfish. The Washington Channel is always a good spit, with anglers taking some bass off the seaway and the reduced grass beds.

Downstream, anglers are targeting grass beds at high tide in the mornings, with deeper waters and structure in the afternoons when the tide is low. The cooler temperatures have the bass sluggish with successful presentations placing the lure very close to the fish and worked slowly. Snakehead action has cooled down a bit.

Near the Route 301 Bridge, anglers are taking some striped bass from the murky water. Croaker and other fish that like saltier water are few and far between.

Near the river’s mouth, anglers are targeting the channel edges around St. Georges Island. The greatest success is by those live lining spot, which are plentiful around the mouths of the Wicomico and St. Mary’s rivers. Other anglers are chumming or chunking for stripers, which are now mixed with some bluefish that have arrived on the scene late in the season. Croaker and white perch round out the possibilities. Crabbing is finally getting better. 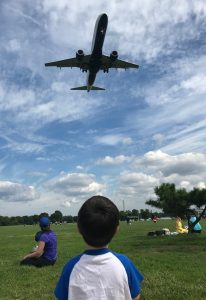 Gravelly Point Park is a favorite spot for kids of all ages for one main reason: the love of airplanes. The park is known for being one of the best places for plane spotting in the nation. The grassy strip of land is located just north of Ronald Reagan Washington National Airport in Arlington, Va. and just a few hundred yards from their runways. With your feet planted firmly on the ground, it feels like your fingers could graze the bottom of the Boeing 747’s passing just above your head. The view of the underside of the planes is only complemented by the stunning skyline of our nation’s capital just across the Potomac River.

Gravelly Point is located alongside the 18-mile Mount Vernon Trail, which runs from Theodore Roosevelt Island to George Washington’s Mount Vernon Estate. This trail is a favorite of bicyclists, runners, and walkers for its smooth surface and beautiful views. The rocky shoreline is a prime spot for anglers. 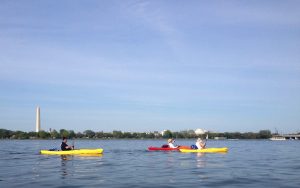 Kayaking on the Potomac River

It gets busy on weekends, so come early to find a parking spot or use the Mount Vernon Trail for access. Please note that the park is only accessible while traveling north on the George Washington Parkway. Bring a picnic because there are limited amenities.

Trout fishing remains good in the upper basin, where the water has cleared somewhat and water temperatures have fallen into the low 70s in some streams. Some nice trout are being taken in the North Branch Potomac management area, although the Maryland Department of Natural Resources is recommending staying off the upper Potomac until water levels decrease. It is looking like that may be awhile.

There are some reports of growing algae blooms in the mainstem Shenandoah, but the river is still giving up some nice smallmouth bass and sunfish.

Anglers are finding some nice bass fishing the areas around Lander and Brunswick, Md. Fishing shallower areas from the shore in the morning and the evening are productive. The ledges and deeper structure are the target when the sun is high.

Tidal Potomac anglers are not so affected by river levels, but the water remains stained, and aquatic plant beds have decreased. In the District, anglers are taking largemouth bass and some striped bass from the outfall area at Blue Plains. Bridge pilings and the Washington Channel grass beds and seawall are giving up some bass. Anglers also are taking some bass at the mouth of the Anacostia, as well as some snakeheads.

Further downstream, main channel grass beds are good targets and there are reports of some very large blue catfish being taken from the channel off Fort Washington. The back ends of tidal creeks ar harboring grass beds that are productive for bass and snakeheads.

Near Morgantown, Md., anglers are trolling and jigging for striped bass in clearing water. Spot are running, and there are a few croaker as well.

Near the river’s mouth, anglers are finding a lot of striped bass at the St. George Island channel. Some anglers are trolling, but the best fish are coming to those who are live lining spot, which are thick at Colton’s point and the mouth of the St. Mary’s River. Catches of croaker and perch are improving, and crabbing is improving.

How the Potomac Flats became the Tidal Basin 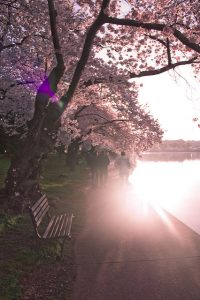 The Tidal Basin in Washington, D.C. is probably most notable for its breathtaking cherry trees that drip soft pink blossoms into the water as spring emerges. However, there is more to this appendage of the Potomac River than meets the eye.

In the mid-1800’s, commerce in the popular shipping ports in the District was hampered by silt build-up along the shores. It was also a health issue. The silt build-up, known as Potomac Flats, sat with stagnant raw sewage and was a breeding ground for malaria-laden mosquitoes.

Authorities decided something needed to be done with this unhealthy eyesore in the Nation’s capital.  Congress agreed it should be enjoyed by the people of the city, ordering it as “forever held and used as a park for the recreation and pleasure of people.”

Around the turn of the century, the U.S. Army Corps of Engineers (USACE) developed a plan to dredge the river, create the Washington Channel (the stream of water that runs through the basin and then between Potomac Park and the mainland), and dump the dredged silt onto the remaining part of Potomac Flats. This created the East Potomac Park portion of the basin and the modern shape of the Tidal Basin that we all know and love. 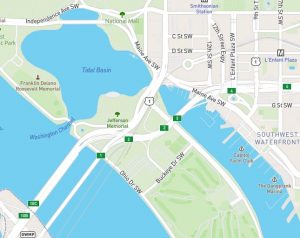 To keep silt, raw sewage, and other unwanted problems from building up, USACE installed a gate at each entrance of the basin. During high tide, the gate at the river allows water to enter the basin while the gate at the channel closes, filling the basin. As the tide ebbs, the gate to the Washington Channel opens while the gate at the Potomac River closes. Silt and other pollutants quickly drain through the channel. The Library of Congress has some diagrams of how the Tidal Basin functions to prevents stagnation and all the problems that come with it, such as algae growth, funky smells, and silt build-up.

This engineering marvel ensures that visitors from around the corner and around the world can enjoy the beautiful sites of the Tidal Basin. The Franklin Delano Roosevelt Memorial, the Martin Luther King, Jr. Memorial, and the Thomas Jefferson Memorial can all be seen along the 2-mile loop around the basin. Walking and running along basin trails are popular activities for both locals and tourists alike. Pedal boats, available for rent, can provide a unique perspective of the natural beauty in this wholly man-made structure. 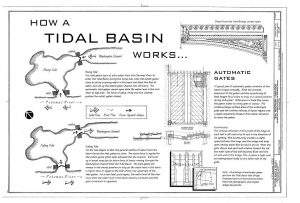 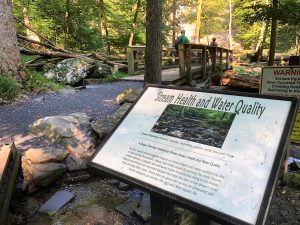 Cunningham Falls State Park, near Thurmont, Maryland, has many treasures. It is known for being the largest cascading waterfall in Maryland. Big Hunting Creek, one of Maryland’s premier trout streams, runs through the park.  Swimming in the lake is a summertime tradition for many families, both near and far.

The park has many miles of beautiful hiking trails, but the most popular trail is the short, forested hike to the falls. It is stroller-friendly and great for all ages. The falls have a viewing boardwalk with benches. After enjoying the falls, head back down to lake, grab a picnic table, spread your towel on the sand and spend the rest of the day enjoying food, friends, and family while cooling off in the lake. Grills are available on a first-come first-served basis.

Check out the park map to find some primo catch-and-release fishing spots in the park.

The park is separated into two sections, the William Houck Area and the Manor Area. Check your GPS carefully before heading out to make sure you are headed to the correct area for your intended adventure. Both areas have a campground. 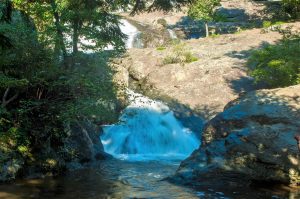 This area has the hike to the falls, the swimming lake, and a concession stand that is open during the summer.

Come early on nice weekends because the park will temporarily close when they meet capacity.

Visit the Scales and Tales Aviary for an opportunity to get a close-up look at (mostly native) wildlife.

The Catoctin Mountain Furnace features a furnace that began operations around 1776. The furnace provided ammunition for the Continental Army during the American Revolutionary War.

Join park staff this Sunday, August 12, for Macroinvertebrate Mayhem (11am, South Beach Nature Center) where staff will lead a walk through a stream to discover what creatures live just below the surface.