About the Basin: East Potomac Park

The history of the 400-acre East Potomac Park is a good reminder of what we can accomplish through ingenuity, creativity, and a little extra dirt.

The park is on the District side of the Potomac River just north of the confluence with Anacostia River. Prior to the late 1800s, this area was mostly underwater, with muddy flats only appearing during low tide. At the time the city was struggling with this stagnant, stinky, mosquito-infested, raw sewage-filled wasteland known as the Potomac Flats. The Army Corps of Engineers decided to dredge the river while using the dredged material to build an island and creating a shipping channel that would allow ships to reach downtown D.C. It was then that the engineering marvel of the Tidal Basin was developed to keep silt from building up in the channel. 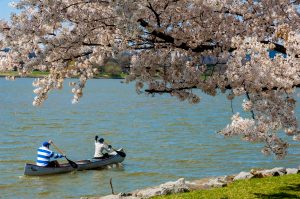 Formalized as “Potomac Park” in 1897, from the beginning, the park was designated as a recreational area for the benefit of city residents. Many would escape the heat of the city to picnic, fish, or bike under the cool canopy of the trees along the river. It is still enjoyed by residents and is considered one of D.C.’s best kept secrets.

In 1917, soldier’s barracks were built and a portion of the land was turned into Victory Gardens by the Boy Scouts of America. Through the years there was a campground, a tea house, and horse stables.

In the 1960s, the park benefited from Lady Bird Johnson’s efforts to beautify the capital city. She planted many of the cherry trees along in the park that were gifted by the Japanese government. Additionally, she donated a charming floating fountain which was installed just off Hain’s Point at the southern end of the island. Unfortunately, the fountain was soon removed as it was deemed a public health hazard for spraying high levels of coliform onto the park.

Thankfully, spray from the river is no longer a public health threat. Many enjoy stand up paddleboarding, kayaking, and canoeing in the river, especially during the magical couple weeks in spring when the cherry blossoms are popping with color.

Golf courses (both mini and regular-sized), a pool, tennis courts, athletic fields, playgrounds, and picnic facilities provide plenty of opportunities to get outside and get active on this island with a rich, but short, history.