Looking to dip your toes in the sand this weekend but can’t stomach the thought of sitting in the Bay Bridge traffic with 500,000 of your closest friends? Switch up your waterfront routine by enjoying one of the many beach-esque options along the Potomac River instead. Listed below are a few of the possibilities along our beautiful Nation’s River.

You will find Colonial Beach, Va. Just a quick 1.5 hour drive south of the District. The town is not only an historical gem (don’t you want to visit the birthplace of George Washington?!), but the entire city is spanned by a calm, sandy beach.

Just north of Accokeek Creek lies Aquia Landing Park in Stafford, Va. This family-friendly park features fishing, picnic pavilions, and even sand volleyball courts. It is a quiet beach that is excellent for bird-watching and collecting seashells.

Another sandy spot seeped in American history is the Point Lookout State Park in Scotland, Md. Located at the mouth of the Potomac River, this park held more than 50,000 Confederate soldiers during the Civil War. Boasting both a museum and a nature center, the park can fill up fast on the weekends so make sure to get there early!

The following beaches are not along the Potomac River but are on this side of this Bay. Flag Ponds Nature Park in Calvert County, Md. is an ideal area for kids of all ages to snag fossils from the Miocene era right out of the sand. Don’t forget your digging gear! A small and little-known beach, Beverly Triton Beach Park, is located outside of Edgewater, Md. It is a great place for both you and your dog to cool off during the sizzling summer heat.

Make sure to tag ICPRB when you are out enjoying the many amenities that the Potomac watershed has to offer!

After the majority of the Mid-Atlantic area received higher-than-average rainfall during the month of May, there is a below normal probability of releases from the Washington metropolitan area reservoirs for the upcoming season. Read more in the Water Supply Outlook.

The ICPRB quarterly business meeting on June 6 and 7 will be held in Colonial Beach, Virginia. Hosted by the 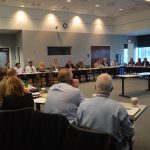 Potomac River Fisheries Commission, the Monday portion of the meeting will focus on groundwater resources in Virginia’s coastal plain. Groundwater is the primary drinking water source, and the Commonwealth is working to quantify the resource, which is under increasing demand. The following day includes the quarterly ICPRB business meeting, with reviews of ongoing projects. The meeting is open to the public, but space is limited. Please RSVP if you would like to attend. 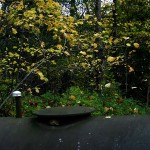 Without proper care, old and rusted heating oil tanks can cause costly leaks and spills. Underground tanks are especially problematic because they can leak for years without notice. Large toxic spills may get all the media-fueled attention, but these silent, slow leaks add up to one major environmental problem for the Potomac River basin and its residents. Read more…

After a dry spell, river flows are rising toward normal, and the Water Supply Outlook predicts a low probability for drought operations this summer and fall.

Interstate Commission on the Potomac River Basin provides a monthly Water Supply Outlook and Status from April to October of each year. Based on careful data analyses, the report provides information on the possibility of a water release from local reservoirs. Read the April Report…

It’s finally spring. Along with cherry blossoms and warmer weather, this time of year brings new wildlife young. We are lucky to live in an area with an abundance of these new little creatures along the Potomac river and its surrounding areas. We are even more lucky to have great organizations that set up cameras to watch the little ones grow.

The National Arboretum Eagle Cam features a pair of Bald Eagles, known as “Mr. President” and “The First Lady,” perched in a Tulip Poplar tree in the National Arboretum. They have two eaglets that were born in mid-March. The American Eagle Foundation is currently taking name suggestions for the new little birds.

The Chesapeake Conservancy has two bird cameras. The Osprey camera features “Tom” and “Audrey” who will be making a family in their cozy nest for the second year in a row. “Boh” and “Barb,” in the Peregine Falcon camera, have already laid four eggs.

The Earth Conservation Corps has their eyes trained on “Liberty” and “Justice,” a pair of Bald Eagles who have made their home in SE Washington, DC for the past eleven years.

The Bald Eagle cam on the grounds of the US Fish and Wildlife National Conservation Training Center in Shepherdstown, West Virginia has been active for over a decade. You can watch “Bell” and “Ben” feed their eaglets while looking over the NCTC campus.

Bonus cams! Watch the American Shad on the Shad Cam run by the Virginia Department of Game and Inland Fisheries. Although not active yet, these native fish should be making their way up the river soon. Done with wildlife? Check out this live view of the Southwest DC Waterfront where construction of the $2 billion project known as The Wharf is underway.

Below, Jim Cummins of ICPRB explains why eaglet eggs hatch this time of year:

DWSPP is pleased to share the 2015 Annual Report. Inside you will find:

Many thanks to all of you who participated in their efforts to protect Potomac basin source waters in 2015. We hope to see you again this year!

To learn more about the Partnership and upcoming activities, visit www.PotomacDWSPP.org.

Mr. Zemba was appointed a Pennsylvania commissioner in 2011, served on the executive committee, served as vice-chairman in 2014 and chairman in 2015. During his tenure, Mr. Zemba worked closely with ICPRB in efforts to help with Pennsylvania’ Water Resources Planning Act, which involves stakeholders in planning for sustainable water resources. Mr. Zemba worked with ICPRB, which helped to assess needs and develop plans in the state’s Potomac drainage.

As vice-chairman, and later chairman, Mr. Zemba helped ICPRB administrate a range of efforts. He brought with him a positive attitude toward the ICPRB, and was always constructive in guiding the commission in protecting and preserving the waters of his state and the basin. We thank him for his many efforts and contributions. He is missed by the commission and Pennsylvania.

For information on the services or to send condolences to the Zemba family, please visit:
http://www.parthemore.com/obituaries/obituary-listings?obId=706768#/obituaryInfo

A new project, conducted by the Interstate Commission on the Potomac River Basin, seeks to explore the relationship between forest cover and source water protection. This project will apply sophisticated watershed modeling tools to determine the potential impacts of forest loss on water quality, and how this in turn may affect drinking water treatment costs. The results will provide an initial step for evaluating the costs and benefits of protecting forested land within the non-tidal Potomac River basin. Read more…