ICPRB > News > About the Basin > Path Through Paw Paw

Located in western Maryland along the border of West Virginia, the Paw Paw tunnel started out as a way for the Chesapeake and Ohio Canal to bypass 6 miles of horseshoe-shaped bends in the North Branch of the Potomac River. A seemingly simple task, it was expected to take 2 years to complete. The first boat floated through the tunnel in 1850, fourteen years later.

Only a few short miles down the river the C&O Canal ends in Cumberland, Md., instead of the originally planned stopping point of Pittsburgh, Pa., partly due to the expense of Paw Paw tunnel. What could go wrong did go wrong during the construction of the tunnel. Engineering problems, worker riots, financial issues and more plagued the contractors. 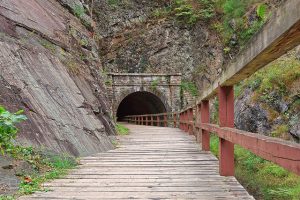 As the saying goes, one man’s trash (or waste of time and money) is another man’s treasure, and this tunnel is a treasure. At 3,118-feet long, it can be enjoyed on foot or by bike, although it is recommended to walk your bike through the tunnel. It is a fun and adventurous look at history, just don’t forget your flashlight (a cell phone flashlight with plenty of battery life would work as well). The trek starts with a .5-mile hike from Paw Paw Tunnel Campground to the entrance of the tunnel. After admiring the archway, breathe in the cool, moist air of the tunnel. A fun walk through the tunnel brings you to a small waterfall on the other end. Once you’ve braved the full length of the tunnel, head back via the 2-mile long Tunnel Hill Trail that goes above the tunnel and includes interpretive signage.

A boat ramp in Paw Paw, W. Va. allows access to those horseshoe-bends in the Potomac River that provide stunning views. Looking for a longer adventure? Enjoy some kayak-camping while you paddle down the twists and turns of the Paw Paw Bends enjoying the rocky gorge. The National Park Service has an example itinerary of a 3-day kayak tour of the area. Don’t feel like going it alone? Join the Potomac Riverkeeper Network’s Paw Paw Bends Float and Camping trip coming up July 15-16.