Blockhouse Point Park is a little-known park that played a large part in history. The park is just north of Great Falls in the western part of Montgomery County on the Maryland side of the Potomac River. To keep an eye on the Confederate troops across the river, Union soldiers used it as a camp and lookout. From high vistas, the C&O Canal and Potomac crossings could be watched closely to prevent enemy raids. Three blockhouses (hence the name) were used as observation points by the Union army. They were eventually burned down by the Confederate troops in 1864. The land was used post-war to search for the Lincoln assassination co-conspirators and to look for Confederate soldiers returning to Maryland because of the excellent views of the Potomac River and its surrounding areas. 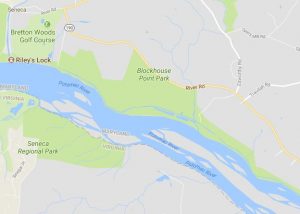 Today, the 630-acre park is used by hikers, bikers, and equestrians. Considered by Maryland-National Capital Park and Planning Commission Department of Parks as one of the Best Natural Areas, it is a microcosm of landscapes with mature upland forest, floodplain forest, palustrine wetlands, streams, river-rock outcrops, and more. It is also home to at least nine species of threatened, endangered, or watchlist plants.

There are 7+ miles of natural surface trails. Much of the trails are designated for hikers only, but there are some “hiker/equestrian” trails and some “shared use” trails. The sole biking trail is the Muddy Branch Greenway Trail that originates in North Potomac, follows the edge of the park, then connects to the C&O Canal Towpath. Two small parking lots are located on the south side of River Road.

On July 15, 2017, Join the C&O Canal Association on a float down the section of the canal that runs through the park. Paddlers will enjoy a trip down the canal from Violette’s Lock just north of Blockhouse Point Park, down to Great Falls. Learn about this event and other fun happenings in the Potomac River basin on ICPRB’s Calendar of Events.