About the Basin, Peculiar Potomac Edition 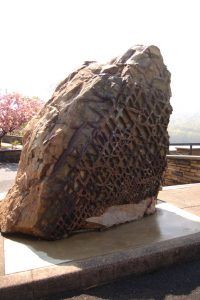 This massive rock has a large waffle-pattern on one side. Some have claimed it is evidence of visitors from another planet, some say it is the scale pattern of a ginormous lizard, and others say it is just an interesting geological formation. We’re going with the “geological formation” theory.

Several hundred million years ago, according to ICPRB hydrogeologist, Jim Palmer, “Joints opened up in the soft sandstone and allowed iron rich water to seep into cracks and form cement around sand particles.” This cemented sand is highly weather resistant. Regular sandstone is not. The soft sandstone eroded away from the rock while the grid-like pattern of the hard sandstone remained, creating a waffle-y rock.

The rock was originally part of a larger formation that broke off some point in the past few hundred million years. It ended up near Shaw, West Virginia, the ill-fated town that is now at the bottom of Jennings Randolph Lake. The rock had geological (and, according to the story, sentimental) value. Before the lake was filled in during the early 1980’s, the rock was moved to its final resting place. It now welcomes tourists and locals alike to ponder the deeper things in life while overlooking the scenic Jennings Randolph Lake.