ICPRB > News > About the Basin: The Black Panther on the Bottom of the Potomac

About the Basin: The Black Panther on the Bottom of the Potomac

The Black Panther on the Bottom of the Potomac 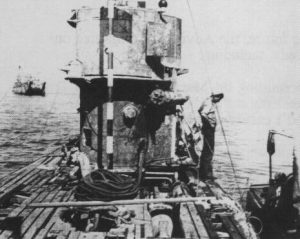 For 69 years a German submarine, known as U-1105, has sat at the bottom of the Potomac River.

Commissioned in June 1944, the submarine lived a short but eventful life. Serving as a wartime patrol near Ireland, it killed 32 men while disabling the British HMS Redmill. Less than a year later, Germany surrendered. The war was over.

U-1105 became a spoil of war as it was valuable for research and testing purposes. Nicknamed the Black Panther due to its “skin” of black synthetic rubber meant to evade sonar devices, the U.S. Navy soon acquired it to conduct research. Only a few years later the submarine took a 20-second trip to the abyss.

It remained forgotten in its watery grave for the next 40 years. Rediscovered in the 1980’s, the shipwreck site just off Piney Point, Maryland, soon became Maryland’s first historic shipwreck preserve and it is now part of NOAA’s National System of Marine Protected Areas.

Although the submarine is a tourist attraction for civilian divers, at 91 feet below the surface, it is considered a highly technical dive with a strong current and low visibility. For armchair adventurers, a video of the Black Panther is available on YouTube.

It is just one of several submarines with intriguing stories found on the bottom of the Chesapeake Bay and its rivers. Learn more about the fascinating history of the Black Panther on the Maryland Historical Trust website.