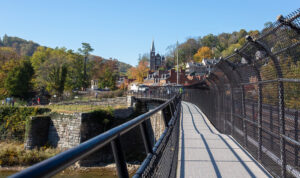 Photo Credit: David Brossard, Do You Know the Way to Harpers Ferry (Flickr)

Harpers Ferry National Historical Park, and its dramatic history, have been explored and extolled by many and for good reason. The town is steeped in history, and it is evident as you walk through the historic village with its living history storefronts and gaze upon the imposing cliffs across the river.

Harpers Ferry sits at the confluence of the Shenandoah and the Potomac rivers in West Virginia. It also “sits at the confluence of history and nature” (National Park Service). It is said that history repeats itself, and that is no different for this small town perched at the meeting spot of two large rivers. Few people have made the area home in the past few hundred years, but the transportation possibilities and natural resources meant,  “The region was used as a highway, a hunting ground, and a place for raiding and trade,” according to a 2017 NPS Report. The Tuscarora and Shawnee tribes built temporary villages in the area, and it was where Catawba and Delaware tribes would clash.

After a series of treaties, broken promises, and finally, the French and Indian War, the indigenous population moved West and European settlers eventually moved into the area in the early eighteenth century.  It continued to be a place of transition as it was repeatedly razed by floods, fires, and war. The people were resilient and continued to populate the area, build up the town, and then rebuild after disaster strikes.

The area is best known for the raid by the abolitionist John Brown, which was considered a pivotal step towards civil war. The town was torn apart by the Civil War. It changed hands, from Confederate to the Union forces, eight times during the war.  A beacon of hope that came from the ashes of war was the development of Storer College, a post-war institute of higher education for formally enslaved people. Supported by the Freewill Baptists, Storer College used many of the wartime buildings to grow their campus. Beyond education, the college provided a sense of community. The college closed its doors in 1955 but you can still explore the former campus.

In addition to history, the Park provides access to the Appalachian Trail/C&O Canal Tow Path by way of an adventurous pedestrian bridge next paralleling a busy railway over the Potomac River. Take a detour off the tow path and hike up to Maryland Heights for a stunning view of the town and the rivers.

Each Saturday and Sunday throughout the summer, you can join National Park Service staff as they tell “The Story Behind the Scenery.”

Contact us for more information
The Shenandoah systems’ North and South forks remain clear and fishable. Recent rains have bumped water levels slightly but they will quickly return to normal for this... Read More