Lost River State Park is an excellent choice for a weekend away from the DC Metropolitan area. It is only a 2.5-hour drive to the eastern panhandle of West Virginia but the park seems a world away. 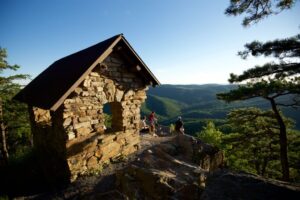 The namesake for the Lost River State Park is not, in fact, lost. The 31.1-mile river temporarily dips underground near McCauley, W.V. then reappears as the Cacapon River. Around 81 miles later, the Cacapon joins the Potomac River.

Whether you want an easy, kid-friendly stroll along a stream (Howard Lick Trail) or a rigorous climb with a breathtaking summit (Big Ridge Trail), there is a hike for everyone at Lost River State Park. Horses, bikes, and hikers are welcome along the trails. The most popular destination is the Cranny Crow overlook which offers a view of the surrounding 6 counties and two states.

Many visitors enjoy swimming and wading in the river on a hot summer day before enjoying a barbecue at one of the many picnic pavilions. 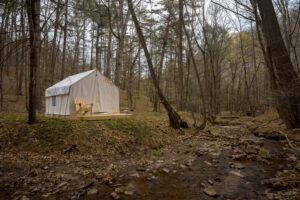 A unique hike-in cabin option, the Primitive Outpost Cabin, is available on top of the Big Ridge Mountain. With no electricity or running water, this is the perfect place to decompress from modern comforts next to a roaring fireplace. For a more luxurious stay, check out their 26 other cabins. These come equipped with water, electricity, and even Wi-Fi.

The land was originally the home of the Massawomeck tribe which was part of the Iroquois Native Americans. The area is part of the Fairfax Grant, the massive area of land promised to the allies of the then exiled English King Charles II as a last-ditch effort to hold onto to the throne. By 1719, Thomas Lord Fairfax had inherited much of the land. In 1756, the Battle of Lost River occurred during the French and Indian War.

After the Revolutionary War, the Fairfax Land Grant property was granted to American patriots. The father of General Robert E. Lee, Henry “Light-Horse Harry” Lee acquired property and built a summer cabin which has since become a museum in Lost River State Park. It is open weekends from Memorial Day to Labor Day.