ICPRB > News > About the Basin > Four Facts About the Potomac

Four Facts About the Potomac 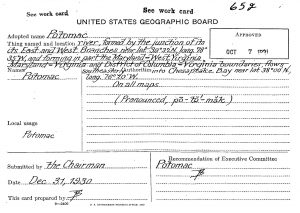 1. Thought by some to mean “something brought”, the Potomac owes its name to the Native American Algonquian village, the Patowmeck. The river’s name went through many iterations until the United States Geographic Board settled on the final spelling and pronunciation in 1931.

2. It is a common myth that Lyndon B. Johnson called the river a “national disgrace.” However, the actual quote is not far off. During the Water Emergency Conference in 1965, President Johnson spoke to governors and other state officials about the water crisis faced by the northeastern states. He talked of the water crisis as both a national problem and a regional problem, summoning the state of the Potomac river as an example: “It is disgraceful. I was out on it last night and you can hardly go down the river without reflecting and wondering why we have been so shortsighted these years. And it has got to stop. We have got to do something about it. And good men, and great men, and wise men, and good Americans, like you, can do something about it.”

3. The Potomac river has 6.11 million people within its watershed and covers almost 15,000 square miles. It reaches into West Virginia, Virginia, Maryland, Pennsylvania and the District of Columbia. Coordinating a reliable supply of drinking water among many jurisdictions is a big challenge. To work cooperatively and efficiently, almost two dozen water suppliers and government agencies have come together to form the Potomac River Basin Drinking Water Source Protection Partnership (DWSPP). Through strategy building, work groups, educational meetings, and more, the members of DWSPP work toward a comprehensive approach to protecting drinking water supplies.

4. The non-native fish in the Potomac, the northern snakehead fish and blue catfish, are commonly written about in the media and well known by the public. But did you know that the bastions of Potomac fishing, the Largemouth and Smallmouth Bass, are also not a native species to the Potomac river? Back in 1854, General William Shriver carted a number of Black Bass (a name given the group of fish of which these two species are included) in the water tank of a B&O railroad train from the Ohio river, intending to release them in the C&O Canal. The fish quickly spread. As an 1874 article in the Baltimore American stated, “From this small beginning, sprang a noble race of fish which now swarm the river.” The rest, as they say, is history.