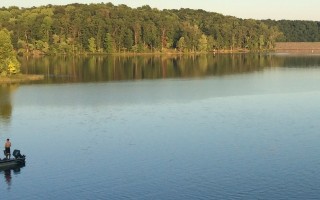 The region’s major water suppliers and the Interstate Commission on the Potomac River Basin Section for Cooperative Water Supply Operations on the Potomac (CO-OP) exercised their ability to respond to severe drought conditions during a week-long exercise beginning September 23, 2015.

CO-OP’s annual drought exercises are a way to practice operations under severe drought conditions. Under such conditions, the region’s normally independent water suppliers work cooperatively with CO-OP to meet the demands of their customers while minimizing the need for restrictions. The week-long exercise uses simulated low flows that allow all parties to practice daily reporting procedures, internal communications, and releases of stored water.

The three major water suppliers draw the bulk of their raw water from the Potomac River. A record drought could drop the natural flow of the river to a level insufficient to meet summertime water demands. When river flow and other data indicate a coming shortage, CO-OP can guide Potomac use among the suppliers and manage releases of stored water to augment flow in the river. The Jennings Randolph Reservoir on the North Branch Potomac holds billions of gallons of water that can be released to help meet Washington metropolitan area demands and environmental flow needs. A release from Jennings Randolph Reservoir can take 8-9 days to reach the metropolitan suppliers’ intakes. The much smaller Little Seneca Reservoir in Montgomery County, Md., is used to adjust river flow over a shorter period of 1- to 2-days.

This year’s exercise focused on honing the communications channels between the utilities, CO-OP, and the U.S. Army Corps of Engineers, divisions of which operate both as a metropolitan water supplier and operator of Jennings Randolph Reservoir. Another focus was the modeling that incorporates drinking water demand data and forecasts from utilities, stream flow data, and weather forecasts to determine the timing and volume of reservoir releases. In addition, the exercise included an actual release of water from Little Seneca Reservoir, testing improved data reporting systems, and a simulation of planned reservoir maintenance that could impact drought operations.

Drought response procedures are refined during the annual exercise, and have resulted in a resilient drinking water system for the Washington metropolitan area’s more than four-million residents who rely on the Potomac as their primary drinking source. More information about the metropolitan water supply system and CO-OP are available on the ICPRB website.

The ICPRB is celebrating 75 years of service to the Potomac basin and its residents.