Waterfalls, boulder hopping, and rare flowers can be found right off the beltway — you just need to know where to look. 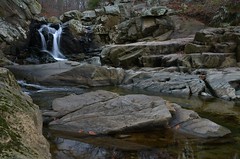 Scott’s Run Nature Preserve is a choose your own hiking adventure type of place. Want a short, meandering walk with the kids? There’s a trail for that. Want to jump boulders while clambering up steep, rocky trails? There’s a trail for that. Want breathtaking views of waterfalls and the Potomac River? Yep, there’s that (but for safety reasons, swimming and wading are not allowed).

The trails are not blazed, but the park is small enough that there is little chance of getting lost. The park’s 384 acres is bordered by I-495, Georgetown Pike, the Potomac River, and a subdivision. The Fairfax County Park Authority provides a detailed topographic map online as well as at kiosks throughout the park.

The only blazed trail is the Potomac Heritage Trail (PHT), which runs through the park. The PHT is a network of trails that run from the tidal Potomac to the upper Youghiogheny river basin.

Spring is a popular time to visit the park due to the carpets of wildflowers found amongst the trees.

The park truly is an oasis amongst the traffic, noise, and hubbub of city life. That was by design. The land was bought in the 1920s by a D.C. attorney, Edward Burling, as an escape from the city. Mr. Burling would visit his cabin well into his 90s and yet refused to let trees be cut down to install a phone line. When Mr. Burling passed in 1966, the parcel of land became the poster child for the nascent environmental movement when the local community fought developers from turning it into a subdivision. The story even made it into the New York Times (The Making of a Park, 1970).

Study the topography of the map before heading to the park. This will help decide which of the two parking lots to use and which adventure to choose.