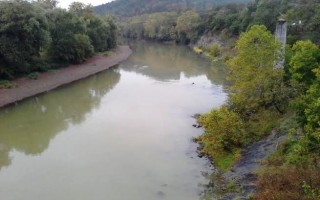 The ICPRB is using an emergency spill model that can help water utilities in dealing with a spill of synthetic latex that entered the North Branch Potomac at Westernport, Md., on September 23, 2015.

The spill of synthetic latex occurred when a rail car of the substance was being unloaded at the Verso paper mill in Luke, Md. About 10,000 gallons spilled into a containment area and traveled to the Upper Potomac River Commission wastewater treatment plant in Westernport, Md., and was discharged to the North Branch Potomac. The Maryland Department of the Environment is investigating the spill, and is awaiting lab results of samples taken from the river. The agency noted that the latex substance, used to coat paper, is not expected to threaten public water supplies at this time.

The ICPRB Emergency River Spill Model provides more than a dozen downstream water intakes with estimates of the time of arrival, maximum contaminant concentration, and the time the contaminant is expected to be past the intake. The model results can be used to guide management decisions by drinking water utilities to protect public drinking water supplies, such as storing water and shutting intakes until the contaminant has passed.

Releases of water from reservoirs (such as a release from the Savage Reservoir last weekend) and rainfall can alter the results as the model uses a set value for river flow. The ICPRB spill staff has now produced multiple model runs covering a range of flow conditions, which have been passed along to the water utilities.  The contaminant may take days or weeks to reach the Washington metropolitan area water intakes, depending on the amount of rainfall during the next few days. The staff at ICPRB will continue to update this information to provide drinking water utilities with the best information available to guide protection of the resource. Visit this page to learn more about how ICPRB addresses toxic spills in the Potomac River basin.

The ICPRB continues to run the Toxic Spill Model and coordinate with water utilities. The most recent run of the Toxic Spill Model (on September 30), indicates the plume will likely reach the DC metropolitan area on or around October 4, 2015, and will have a concentration of less than 1 part per million at that time. Based on sampling results from MDE, styrene and other VOCs are not being detected in the plume.

According to the Maryland Department of the Environment, the synthetic latex is not considered a toxic substance. Water utilities are being vigilant for possible damage to water treatment facilities, but none are expected at this time.  No fish kills are expected and none have been reported.

Please see our FAQ on the Upper Potomac Spill page for more information.

The ICPRB ran it’s final Toxic Spill Model on October 1, 2015 and does not plan on providing any further travel time updates. The plume is expected to arrive in the DC metropolitan area on October 4-5, 2015, at a concentration of less than 0.05 parts per million. Due to recent heavy rains, an increase in river flow has moved the plume quickly down the river and has helped dilute the contaminant.

The Washington Aqueduct reports that tests of water samples collected in the contaminant plume indicated that the contaminants are readily removed by conventional treatment and do not contain detectable volatile organic compounds (VOCs).

The Maryland Department of the Environment has provided a summary of the spill and their sampling results. According to MDE, this is not considered a health concern.

The red circle on the Google map above indicates the spot where the contaminant entered the river.