Looking for a “a drop-dead beautiful place” (Tripadvisor review, Oct. 2019) that is also a quiet respite from the activity of the big city and was once training ground for spies? That’s pretty specific, but we found it for you. Prince William Forest Park (PWFP) is located only 35 miles south of Washington, D.C. along the I-95 corridor. At 15,000-acres, it is the largest park in the National Park Service’s Washington Capital Region and one with an eventful past. 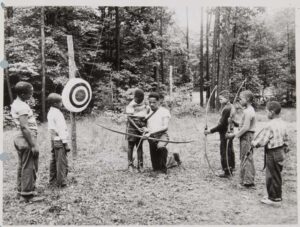 The park has 37 miles of hiking trails, rustic cabins, an RV campground, and primitive hike-in campsites. The park covers much of the Quantico Creek watershed with several streams and ponds for fishing and exploring.

Are you up for a navigational challenge? Grab a map and a compass from the visitor’s center to try your hand at orienteering. This Scandinavian sport uses a map and compass to navigate to various checkpoints throughout the forest. The park has 30 orienteering courses for all navigational skill levels. You will have a chance to practice your spy skills, like park residents of the past.

Like many parks in the National Park Service, PWFP has a storied past. Prior to the Great Depression there were several well-populated African American communities in the area including Hickory Ridge and Batestown. These towns had been well established for hundreds of years. The towns grew after the Civil War as many formally enslaved people moved in and called it home. Many of the residents worked in the local Cabin Branch Pyrite Mine until the mine closed in 1920.

When the federal government instituted the Resettlement Administration (RA) program in 1935 to provide land to struggling farmers, they bought or condemned much of the property and forced the community out of their homes. Many residents resisted. The federal government continued to acquire land as part of the Recreational Demonstration Area program which claimed to protect forestland, provide jobs, and create recreational opportunities for nearby city-dwellers. This stretch of Eastern Piedmont forest would soon become the Chopawamsic Recreational Demonstration Area. It was thought to be a shining example of what the RA program could do. In 1948 the park was renamed Prince William Forest Park.

After the attack on Pearl Harbor, area residents who had not left by the 1940s were forcibly removed to make way for a training camp for the Office of Strategic Services (now known as the CIA). The Quantico Marine Corps Base abuts the park to the south. The park’s relationship with the base was fraught, but fruitful, for both parties. The military used the camp cabins, built by the Civilian Conservation Corps, to train spies and radio operators. There was even a “Little Tokyo” training facility. At one point, the park administrator convinced the military to build roads and other infrastructure in the park as part of their training operations. In honor of its war-time history, the park now holds a 3-day Spy Camp each summer.

A more detailed account of the park’s fascinating history can be found in Prince William Forest Park: An Administrative History.

A Visitor’s Center with maps and information is located at 18170 Park Entrance Road in Triangle, Virginia. The PWFP staff frequently update the COVID-19 operating status so please check online prior to heading out.