What is a Letter Writing Campaign?

A letter writing campaign is a method of making your group’s voice heard on issues that are important to the health of your watershed. They are a way of informing elected officials and decision-makers of the implications of their actions and encouraging them to act in accordance with the wishes of their constituencies. In addition to targeting decision-makers, they can be designed to reach the media to publicize an issue, potential donors to your organization to help you raise funds, and other like-minded organizations to encourage them to multiply your efforts.

Why Should I Start a Letter Writing Campaign?

Some believe that letter writing is a meaningless, feel-good exercise–that decision-makers do as they please or as paid lobbyists suggest. The reality is that well-timed, informed, and clearly written letters can have an affect on political decisions.  This is especially true in the lower echelons of government–at the state and local level. Even when elected officials decided on an issue or taken a public position, letters let them know the political cost of their decision. Many elected officials keep track of how their constituents would like for them to vote and therefore more letters have a cumulative impact. Elected officials understand that there are fewer letter writers than voters, but they also understand that those that do write are more likely to vote.

Another reason to engage in letter writing campaigns are that they are relatively simple to organize–an easy campaign can be organized by one knowledgeable person in one day!  Letter writing is also a great way to inform the public on issues, to get them to take action, and to help them feel involved. This is especially important with citizens that cannot participate in physical restoration events but still want to be involved. Finally, letter writing can boost your group’s visibility–both with the letter writers and those receiving the letters. If your elected official sees that your group is vocal and persistent, s/he will want to at least appear to listen to your perspective and perhaps even occasionally provide aid to your efforts.

Developing Your Goals and Budget

Set your goals depending on the type of official that you are writing.  For example, it may only take twenty to thirty letters to influence a local elected official, however to impact your representative in the national senate it may require hundreds of letters. Decide on the number of letters you want and plan on reaching at least 30 to 100 times that many people in order to get the desired volume of letters, especially if you expect them to write their own letters rather than simply signing a pre-written one provided by you.  Some example goals for a letter campaign might be:

The cost associated with starting a letter writing campaign can be as low as the price of printer ink and computer paper (or even less if you want to use email), however there are many optional costs depending on the type of campaign you want to put together and if you are developing a long-term network of letter writers.

Some example cost include:

Although letter-writing campaigns are inexpensive, they are not easily financed. Most grantors will not pay for political activities so your effort will most likely need to be paid for through donations to your organization.  Another way to reduce the costs to your organization is to spread the cost around to the individuals writing the letters. Most people who are active enough to write a letter will also be willing to pay the price of a stamp to make sure that it is sent!

There are several steps in putting together a letter writing campaign.  Some of the steps can take time.  Because issues often arise unannounced and quickly and because they must often be responded to swiftly, it is best to have as much work done in advance as is possible. A typical campaign requires:

Below is a general list of materials you will need to put together a letter writing campaign.

The most important part of a letter writing campaign is knowing this issue. A good campaign will demonstrate to your elected official, to the general public, and to the media that your organization knows the details of the matter at hand.  This will help give your organization credibility and name recognition for all involved. A poorly researched campaign can have the opposite effect.

Research is something that should be done long in advance of the campaign. Your organization should follow the issue as it evolves and know the different perspectives of those involved with the topic. When the matter is coming to a head is not a time to begin learning about it. Except in rare cases, stay away from leading letter writing campaigns that your group does not know intimately.

As the issue evolves, keep notes with an eye to leading a letter writing campaign. Compile quotes of parties for and against the issue and outline a background paper for those who you will be asking to write letters. Give them all sides of the issue and emphasize why you have chosen the position that you are pushing.

This is another step that can and should be done in advance. Your group should keep a list of elected representatives and decision-makers for your watershed and their contact information. Along with this information you should compile data on what committees they sit on and chair and/or their responsibilities. As you are considering what position your group will take on an issue you should also be considering who you should be writing to express your opinion. You may want to draft several letters to different decision-makers keeping in mind their particular point of view. 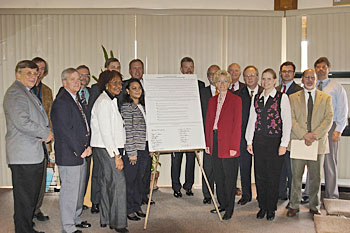 This information is crucial because it does not do anyone any good if the campaign is not directed at the appropriate officials.  For example if you direct a campaign to clean out storm water catch basins at the head of the Water and Sewer Authority and this work is actually carried out by the Department of Public Works, you have wasted your time. Remember that your local representatives often wear several hats and has different staff for those different roles, so be sure you make the subject of the letter easily known so that it is directed to the appropriate person.

If you are writing a member of Congress, remember that they often have several offices to which correspondence can be directed, including the personal office and the offices of the several committees on which he or she sits. This is crucial because the congressperson is unlikely to actually see the letter. Instead, it will be handled by their staffers. The personal office is concerned with the political survival of the member, and much of their work is focused on constituent service. If you are writing as a constituent, particularly as a supporter or as a campaign contributor, the letter will usually carry particular weight with personal staff. The personal office also helps the member deal with the myriad of issues that come to the floor for debate or votes each day, tracking them and weighing them against the member’s views, political interests, and commitments. If a bill of interest were out of committee and headed to the floor for vote, they are the appropriate people to write and say whether you would like it passed or not.

Most of the actual work of crafting legislation takes place in committees, usually in subcommittees. If you are trying to influence how that process goes, you need to write to the committee, usually the committee chair and ranking minority. Often that person will not be your own representative, and generally you will write to them as an expert or as an official or unofficial representative of a broader group of stakeholders. These letters tend to be more elaborate, containing more detailed arguments and examples.

The issue you are interested in is now being considered and the hour is now at hand to start your letter writing campaign. The first step is to finalize the background information that you will provide your letter writers.  You have two competing goals here – you want to be brief, but you want to be as thorough as possible. Try to give the writers information on all sides of the issue so that they will be able to write more informed letters, but emphasize why your group has decided to come down on the side of the issue you have chosen. Try to provide this information in one page or less.

You are now ready to write sample letters to your targeted decision-makers. Again, you have two conflicting needs and you must find the appropriate balance.  The first is the need for personal letters. An individually written letter will pack more of a punch than a form letter. On the other hand, you want to make letter writing as easy as possible for your campaigners. One solution is to provide your letter writers with one or several sample letters that they can then personalize.

What should a good letter have?  The best letters to decision-makers are brief and to the point and are structured to include four points:

You first want to identify yourself and your organization.  You can be writing from more than one role.  Are you a(n):

Constituent – a voter telling your representative your views of some issue.

Stakeholder – someone directly affected by a decision.

Expert – a person who has specialized knowledge about the issue being considered.

Representative – someone expressing the view of the group for which you are speaking.

Now that you have your letters and materials completed, it is time to go out and get others to sign on to your campaign (literally!). There are many ways to get the public to write letters for your effort and the method that you use will change from campaign to campaign depending on your needs and goals. Use your imagination to come up with inventive methods for getting people to support you cause. Some methods include:

No matter how you approach your campaign remember the following:

Letter writing is not like most environmental efforts. For example, volunteer tree planters can see the fruits of their labor when the work is done. At the end of the day, your volunteer writers will not see if their efforts have succeeded or failed. You must follow up with them to let them know how the campaign turned out. This is another reason to make sure to get their contact information.

In order to be able to let your volunteers know how the campaign went, you may need to follow up your efforts as well. If your efforts were aimed on passing or defeating a certain bill, you will be able to easily gauge your success. If you were aiming at changing a policy, you may need to contact the decision-maker you were writing to see if your efforts made an impact. If you were successful in changing an official’s mind, send them another letter saying thank you. These letters are few and far between for elected officials. They will remember you and it may help in future efforts.

Take it a Step Further

If you have a database of passionate volunteers, have them call their elected official to express their opinion for certain legislation or action. Provide talking points and a suggested script for the volunteer. Knowing that a constituent is passionate enough about an issue to pick up the phone can go a long way in convincing elected officials to vote in your favor.

**Have you completed a project listed on W.A.T.E.R.? Send us a photo and we’ll feature your group in our Newsletter and Facebook page!**