Virginia Department of Environmental Quality staff confirmed the algal mats were scoured off the river bottom. Water samples collected by ICPRB at the Shenandoah River mouth indicate the storm’s high flows diluted the algal cells and their associated toxins to below-detection levels before they reached the Potomac River. If flows had been less intense, we hypothesize the scoured material and toxins could potentially have reached the Potomac River mainstem. More advanced flow modeling and additional sampling during algal blooms could better characterize the potential transport of scoured or senescing algal blooms in the Shenandoah River under different river conditions. 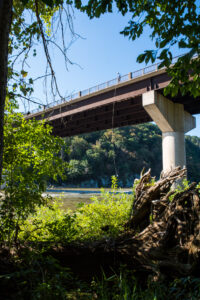