ICPRB > News > About the Basin: Mallow’s Bay, the Graveyard Teeming with Life

About the Basin: Mallow’s Bay, the Graveyard Teeming with Life

An iconic spot on the Potomac River recently acquired a new name. The ghost fleet of Mallows Bay is now known as the Mallows Bay-Potomac River National Marine Sanctuary thanks to its new designation by NOAA. It is the first such sanctuary in almost two decades. 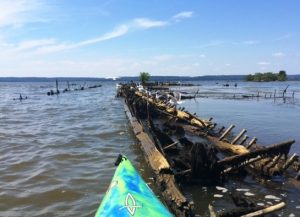 On the Maryland side of the Potomac, just south of Washington, D.C., historic ships sit at the bottom of the river like an apocalyptic scene in a war movie. Mallow’s Bay is the final resting place for almost 200 boats that cover two centuries of history. Paddleboarders and kayakers alike feel a sense of magic while floating through the water, knowing that at any given time they are only inches from rich history. As the largest concentration of shipwrecks in the Western Hemisphere, there is nary a spot in the bay where there is not a ship decaying on the floor below. These salvaged, and then sunk, ships are now home to a wide variety of fish, crustaceans, and aquatic vegetation. Some ships have created islands where osprey nest and crabs skitter across the sand.

The next few years will most likely see many changes for Mallows Bay. Possible plans for the area include paddle-in campsites, hiking trails, interpretative signage and additional public access amenities. Designation as a National Marine Sanctuary will only increase the speed and intensity of the additions and the public exposure it receives. These changes will bring their own benefits, but in the meantime, now is a great time to visit this primitive and isolated area. Take advantage of the quiet, meditative bay with the beautiful, sunken boats.